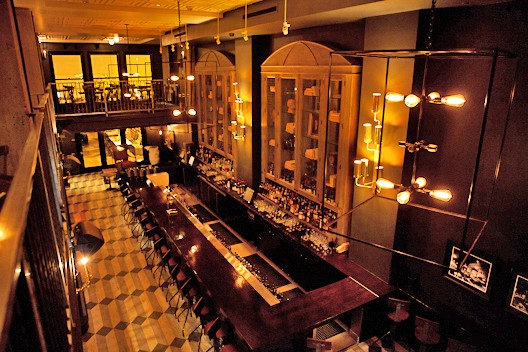 New restaurant/bar/lounge on the ground floor of the historic Taft Building at the corner of Hollywood Boulevard and Vine Street. Approximately 2,000 sq. ft. of ground floor space, 1,200 sq. ft. of mezzanine space, and an additional 800 sq. ft. of outdoor patio space. On behalf of Wood & Vine, LLC, Urban One lead the development and construction management for the future eclectic Hollywood nightspot that opened in early 2011.  Since opening, Wood & Vine has received critical acclaim for its design, location, menu and top-notch service.

Restaurateurs and other retail/hospitality business owners face a difficult challenge when opening up their establishments. Not only do they need to create the concept and secure the financing to make the venture possible, but they must also hire and manage all parties involved in the design process: the Land Use Planner, Architect, Structural Engineers, MEP Engineers, Interior Designers, and all other Specialty Consultants such as Waterproofing, Acoustical, and Kitchen Equipment Consultants. The sheer volume of contracts, requests, and technical questions can quickly overwhelm even the most experienced proprietors.

In addition, there is a critical role of working with the Public Authorities. For example, in addition to pulling all of the proper construction permits, there should be a strong working relationship with the City Plan Checkers and Inspectors to ensure code and safety compliance before, during, and after construction with an end goal of achieving a Certificate of Occupancy. The Owner must also follow the steps necessary to get a Conditional Use Permit (CUP) from the Planning Department and work with the State of California Alcohol Beverage Control (ABC) to obtain a liquor license if required. We have found that without proper management of this often opaque process, the project schedule can quickly become a problem.

Furthermore, the construction process introduces a General Contractor or multiple Prime Contractors who must be hired and managed in order to perform the actual construction. To ensure that one is getting quality work at a reasonable price, it is important to set up a formal bidding process that involves multiple bidders for each trade. Also, all of the desired furniture, fixtures, and equipment (FF&E) must be selected and ordered far enough in advance from the respective vendors to ensure they are ready for the anticipated opening date.

If the Owner is renting the space they plan on putting their business in, then they must be cognizant to the needs of the Landlord. A lease must be formed and negotiated, and in most cases the Landlord will want to perform a peer review of all of your construction documents before you start construction. At the back end of the project, they will also ask for as-built drawings, operation & maintenance manuals, and warranties for their records.

As one can see from this litany of tasks, there are many moving parts to a typical restaurant, retail, or hospitality project, all of which may be a daunting undertaking for many small business owners to handle on their own. This is why the addition of a Project Manager to any project team is sometimes an overlooked asset in opening up a successful project on time and on budget. Urban One bridges this gap between Ownership and all other entities involved, acting as the Owner’s direct representative. Urban One will manage over every aspect of the project as if it where their own, so that the Owner can focus their time and resources on more important issues that will drive the establishment to long-term success, such as the menu, staff, operations, marketing/branding, public relations, and community outreach. All of our clients have found the time and money saved by having our project management services involved has more than paid for the additional fee.

For example, on Wood & Vine, Urban One’s value engineering efforts saved close to $300,000 alone. The Owners received preliminary budget pricing from a General Contractor in the very early stages of project conception when they were underwriting the deal. This price was based on the very few conceptual drawings that they had at the time. Once Urban One became involved with the project, the design of the restaurant began to take shape into a set of design development docs. After the drawings were submitted to plan check at the City several times, the design was something above and beyond what the Owner had carried in their pro forma. It was at this point that Urban One diligently went through the drawings and came up with a list of value engineering items that would reduce cost to the Owner and their investors, but at the same time, not diminish the value of the space. We then made a collaborative effort with the Architect, Interior Designer, selected General Contractor and Owner to vet out the VE items that everybody could live with and accept at the end of the day.  When all was said and done, close to $300,000 in hard costs were cut off the number that the General Contractor was carrying in his bid. This allowed the deal to pencil again and solidify the proper returns that the Owner and their investors had hoped for.

Check out progress photos of the Wood & Vine on Urban One’s Flickr page.