The Future of the Arts District: Developers Look Forward, Policy Looks Behind

Home / The Future of the Arts District: Developers Look Forward, Policy Looks Behind 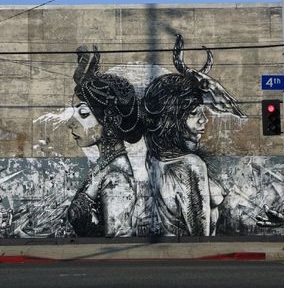 The Future of the Arts District: Developers Look Forward, Policy Looks Behind

Everyone knows that the Arts District in Downtown Los Angeles is absolutely blowing up right now. It’s one of the trendiest neighborhoods, if not the trendiest neighborhood in Los Angeles, filled with the best bars, restaurants, coffee shops and edgy retailers. Developers are flocking to the much sought after area, buying up properties and announcing plans to transform the area with all sorts of new residential and retail developments. Just this month we’ve heard about several new projects coming to the area including a 125,000 square foot “Grove style” open air mall, a 240 unit mixed use complex designed by LOHA, and a 100,000 square foot arts complex from former MOCA chief curator Paul Schimmel, not to mention the forthcoming opening of the titanic One Santa Fe including 438 apartment units and a grocery store. Yet the thing that makes the Arts District so cool – its industrial, gritty charm – might be the one thing that has the ability to put the brakes on its rapid redevelopment.

So what’s the issue here? Well, the problem is that the area is still governed by policy documents that consider the area an industrial manufacturing center. These documents call for the preservation of this land for manufacturing and industrial uses and the preservation of jobs that come along with those uses. While the Community Redevelopment Agency of Los Angeles (CRA/LA) has been dissolved, the plans they created remain in place and are being carried out by the Department of City Planning, meaning that the Central Industrial Redevelopment Plan still applies to the Arts District. A main goal of this plan is to maintain industrial land and incentivize new manufacturing businesses to come to the area. Importantly, the plan limits the total residential units for the area to 2000 – a number that has likely already been surpassed. This plan was adopted in 2002; not exactly a time when Downtown or the Arts District were desirable or the pinnacle of hip.

Additionally, in 2008, the Department of City Planning issued a policy memo directed at Planning staff which emphasized the importance of preserving industrially zoned land. This memo named the Arts District and surrounding area an Employment Protection District (EPD). EPDs are, “Areas where industrial zoning should be maintained, i.e., where adopted General Plan, Community Plan and Redevelopment Plan industrial land use designations should continue to be implemented. Residential uses in these Districts are not appropriate”.

A lot of the plans for new development in the Arts District that have recently been announced have not started or completed the approval process with the City of Los Angeles. Without approval from the City, these new developments are merely aspirational, not actual projects that are legally able to be implemented and carried out.

The good news for these projects is that we have seen pushback from some City Councilmembers, especially in Downtown, who have made recommendations that went against the 2008 policy memo and 2002 Redevelopment Plan. An opposing paradigm to preserving industrial land is growing roots in the political landscape of L.A. City government that basically argues that while the City has a responsibility to retain some industrial land, the manufacturing era in Downtown is long gone. Los Angeles has essentially shifted to a service industry economy which does not require large swaths of industrial land, especially in areas that are already experiencing a shift towards residential and commercial uses. Industrial areas should be made more compatible with residential and other mixes of uses.

Another vital piece of news for these projects is that the Department of City Planning is working on developing an Artists-In-Residence District and Interim Live/Work Zone for the Arts District. While this interim zone would allow for the construction of new residential units in the Arts District, the only new housing type allowable will be live/work arrangements that must be at least partially dedicated to “arts and productive uses” including artist studios, art galleries and exhibition/performance spaces, co-working facilities, artisan/micro-manufacturing, creative office, development and research, and urban agriculture. No traditional apartment style housing will be allowed in the area.

The Department of City Planning is clearly responding to change in the Arts District and the desire for more residential uses, but it appears that shifting policy is not necessarily moving towards a wholesale swing in the other direction that some developers may be counting on. This new zone is still in the early stages and while it may casually inform decision markers, it is not yet the law of the land.

So what’s going to happen to these projects? What will the Department of City Planning, Planning Commission, and City Council decide about their fate? With such a powerful buzz going on in the Arts District, it seems unlikely that anything will stop its momentum, but only each project’s individual approval process will tell.