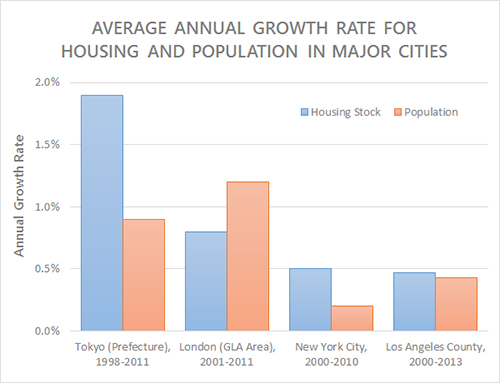 Earlier this month the USC Lusk Center for Real Estate released the 2014 Casden Multifamily Report, an overview of housing trends in Southern California and a forecast for vacancies and rent increases over the next few years. The major takeaway for both Los Angeles and Orange County is that, despite what feels like a construction boom over the last several years, we’re still not building nearly enough to meet the demand for housing in the region, and rents are projected to continue their upward trajectory as vacancies fall even further.

The report notes that more than 7,500 multifamily units were built in LA County between 2013Q2 and 2014Q2 – “an almost 62 percent increase from the number of units completed during the previous year” – but that vacancy rates have remained stubbornly low for years. Vacancies have fallen for four straight years, from 6 percent in 2010 to 3.3 percent today, and they’re expected to continue decreasing. It’s generally believed that vacancies must climb to around 5 percent for the market dynamic to shift to a “renter’s market,” where competition between landlords forces down prices and renters can demand concessions like smaller deposits or a free first month’s rent.

Los Angeles is a world-class city that draws residents from across the globe, and so it shouldn’t be surprising that it’s difficult to keep up with regional demand for new housing. That said, our current construction “boom” is anything but: Including single-family and for-sale multifamily homes, LA County permitted just under 15,000 units in 2013; if we really hope to stabilize housing prices, LA should be producing tens of thousands of new units each year.

That may sound like a lot, but consider this: According to the 2013 American Community Survey, LA County has approximately 3.46 million households. Since 2000 we’ve added an average of 16,238 new residential units per year to the Los Angeles housing supply, which represents an annual increase of just 0.47 percent. Even London and New York, cities not known for their rapid growth over the last several decades, have increased their housing stock by about 0.8 and 0.5 percent per year, respectively. These are not cities we want to emulate if we’re serious about housing affordability.

Compare that to Tokyo, which managed an incredible 1.9 percent annual housing growth rate between 1998 and 2008, twice the rate of population growth in the region. It’s been rewarded for those efforts: According to a study last year by Demographia, Tokyo is the most affordable megacity in the developed world, with a median home price of just $265,000 – far below LA’s 2013 median value of $450,000. Los Angeles grew its housing stock at about the same rate as its population growth, but with household sizes shrinking and population growth picking up in recent years, 15,000 units per year won’t be anywhere near enough.

San Francisco, our neighbor to the north, is a depressing example of what can happen when the supply of housing is ignored. Despite incredible economic growth (and moderate population growth) in San Francisco over the years, it’s built barely any new housing. That’s a huge problem because, as the chart below shows, there’s a direct connection between the amount you build and the cost of housing. A general increase in demand for urban living and an influx of tech workers have put tremendous pressure on the Bay Area’s home prices, and with no relief valve in the form of new housing, it’s now one of the most expensive markets in the country:

Among the tech hubs listed above, San Francisco is the most expensive market in the list, at nearly $600 per square foot. Not coincidentally, it’s also built the least housing relative to its size. Los Angeles’ housing costs aren’t far behind, at approximately $450/sqft. Over the 23-year period from 1990 to 2013, San Francisco increased its housing supply by approximately 11 percent. Sadly, LA is on almost exactly the same trajectory.

Since 1999, a fifth of all Los Angeles development has occurred in Downtown LA. If that growth can’t expand significantly into other neighborhoods – and if we don’t make more productive use of the high-demand land near transit stations – Los Angeles is rapidly on its way to costs rivaling those of New York, Washington DC, and San Francisco. Homes here are already so expensive that half a million residents can’t afford housing at a reasonable rate, and without a more proactive approach we’re only going to fall even further behind.

About the author: Shane Phillips