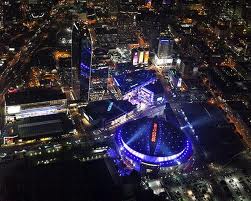 The methodology used by Walk Score looks at different criteria to assess walkability of a neighborhood, including population density, block length, and distance to amenities, giving the amount amenities within a 5 minute walking distance or ¼ mile more weight. When looking at Downtown as a whole, it is easy to see why it received a high walk score considering there are a multitude of destinations within each of the districts of Downtown, including the Civic Center/Little Tokyo, Historic Core, Financial District, South Park, Jewelry District, Fashion District, and Restaurant Row. The problem lies in the fact that even though there is a high density of destinations within the different districts, the districts themselves are not well connected to each other, spanning approximately four square miles total. This makes walking from one end of Downtown to the other difficult.

There is a similar story regarding transit. Most transit Downtown is focused on regional connection, not circulation within Downtown. While Los Angeles as a whole is sprawling with multiple centers, the transit systems generally function as though LA was still monocentric. For instance, the Metro Rail system converges in Downtown at 7th/Metro Station and Union Station, with radial lines moving out to the other regions of Los Angeles County from Downtown.

The sheer presence and density of transit lines in Downtown LA contributes to a high transit score from Walk Score, who take into consideration transit’s usefulness within a neighborhood. Usefulness looks at the amount and frequency of transit routes, mode of route (i.e. rail or bus), as well as distance to nearest stops. So while DTLA scores well according to these criteria, the ability of transit to circulate people around Downtown is still limited.

Consider this scenario: James takes the Red Line from North Hollywood into the Civic Center to spend an afternoon at Grand Park. As is typical in LA, it’s a warm sunny day at 75 degrees Fahrenheit. James has concert tickets at LA Live later that evening and wants to eat dinner in South Park beforehand. If he were to walk from Grand Park to LA Live, he would have to walk approximately 14 blocks or 1.5 miles in the heat. If he wanted to take transit, he would need to take the Red Line to 7th/Metro Center, then transfer to the Blue or Expo lines to get to the Pico Station, being charged $1.50 for each leg of the trip.  While both are doable, neither of these travel options is ideal. Instead, the streetcar would allow James to take a single transit trip from the Civic Center to LA Live, passing through the Historic Core and the Fashion District on the way.

In another scenario, Sarah lives in Little Tokyo, doesn’t own a car or a bike, and is transit dependent. She needs to get to the grocery store, but the only full-service grocery store in Downtown is the Ralphs on 9th and Hope Street. Without the streetcar, she is faced with a similar situation as James; either walk 10+ blocks or take two transit trips to get to her destination. With the implementation of the streetcar service, Sarah would only need to take one transit trip, walking only a few blocks to and from the streetcar stations.

While Downtown is incredibly walkable and transit accessible when looking at the overall amount of destinations and transit in the entire 4 square mile area, it is less walkable when considering real world scenarios that face downtown visitors and residents, especially when their destinations are outside of the accepted ¼ mile walking threshold. The streetcar will take the density of destinations and regional transit accessibility in Downtown and amplify their positive effects by unifying the districts of Downtown into one cohesive neighborhood.