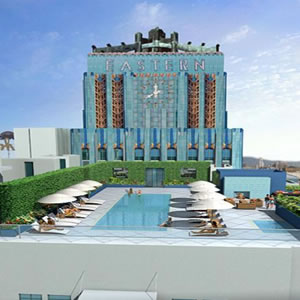 Here is a great post on Curbed LA about the renovation of the Eastern Columbia Building in Downtown Los Angeles.  Urban One’s partners had a hand in this when they worked at The Kor Group, and this was one of Dennis Allen’s biggest accomplishments during his tenure at the firm.  Originally built as a department store back in the late 1920’s, one can see the condition that the building was in when Kor acquired it in 2004 when looking at the photos of the water-damaged terra cotta facade.  The condo conversion revitalized this dilapidated structure, bringing it into the twenty-first century without compromising any of its historic roots.  The success of the Eastern Columbia Building paved the way for the Adaptive Reuse Ordinance in Downtown and the rest of the Los Angeles.  Click here for the full story on Curbed LA: