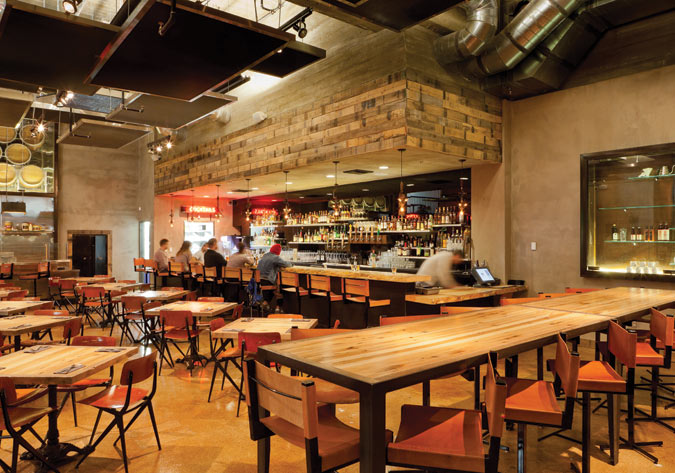 If you had the opportunity to read one of our previous posts on the The Kor Group‘s redevelopment of the Eastern Columbia Building being one of the trailblazers of the Adaptive Reuse Ordinance in Downtown Los Angeles, then you will enjoy a recent article published on The Architects Newspaper blog.  We all saw are surge of historic office properties being converted into multi-family uses in the early to mid-2000’s, shortly after the ordinance was put into effect in 1999.  Now, Downtown Los Angeles is gradually starting to see a second wave of redevelopment, this time focused on food and retail use.  These makeover are creating a entirely new phase of development that will eventually rejuvenate Downtown.

According to The Architects Newspaper, “since 2008 over 400 new restaurant and retail shops have opened in Downtown LA, with another 50 expected to open this year. With an abundance of largely intact historical buildings, architects and designers have paid homage to the past by restoring or re-creating many of classic features while adding a modern sensibility.”  One of the architects that has found his way into this niche is Kelly Architects, who designed Wood & Vine for us and our client Vine Street Partners a couple years back in Hollywood (on the ground floor of the historic Taft Building – if you have not yet been, please do and try the Chicken & Waffles!).

A main artery of this surge of new restaurants and retail Downtown is the historic Broadway corridor.  The street, which in the past has been one that people have avoided when the sun goes down, is slowly morphing into something special.  Bringing Back Broadway, which is a public-private partnership with the mission to revitalize the street, feels that this new street-level retail will need to be supported by new office use above in order for these businesses to thrive and the district to become stronger.  Our plan to bring a streetcar line to Downtown Los Angeles will help the area even more, especially Broadway, which is the main thoroughfare for the proposed Los Angeles Streetcar line.  The “re”-introduction of the streetcar line will make this part of town more pedestrian-friendly and also presents a unique investment opportunity to Downtown property and business owners to increase their sales, rents, and property values.  Some of you may not be aware, but Los Angeles at one time had one of the most elaborate streetcar systems in the nation.  With permanent tracks in the road, those who are in close proximity to the line can feel assured that it is not going anywhere anytime soon.

Click here for the full story on The Architects Newspaper: